March 04, 2021
BWD Electronics were a Melbourne, Australia, company that made test equipment in the sixties and seventies. Many years ago this unit was saved from a fate as landfill, and served as my introduction to "serious" test gear. Never having had any training with this sort of thing, I was never sure if it was fully working, but it was certainly good enough to signal-trace audio, helping me fix synths and FX units, and teaching me along the way.
And then one day it went blank. 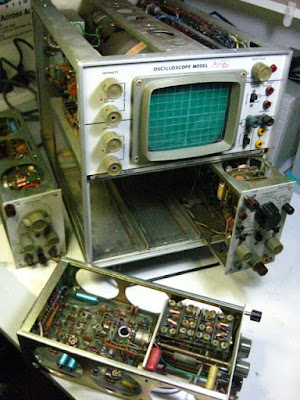 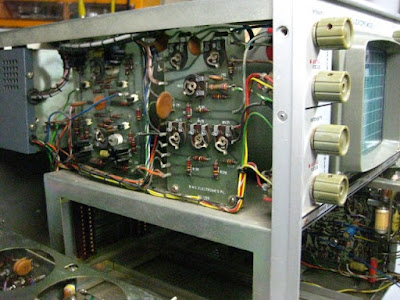 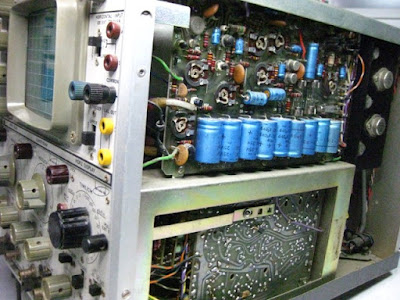 It was a daunting task for a novice, but I had some hand-holding from the SOS DIY forum where a couple of regulars wised me up to EHT (extra high tension) circuits and how they work with CRTs. Unfortunately not before I cooked my multimeter poking around the 3000 volts area. Oops! 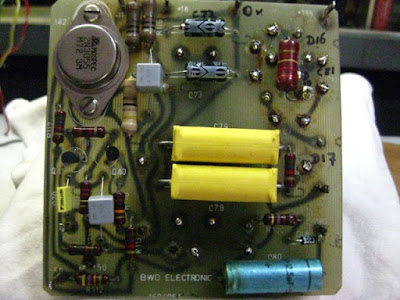 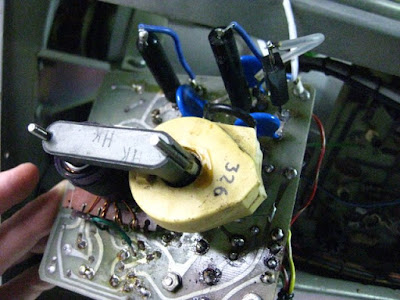 .. and the reverse, with the twin coils 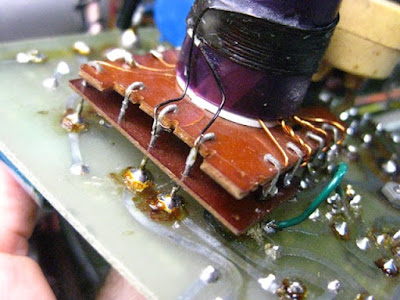 the coil mounting
Luckily, just a couple of resistors took the brunt of that. I was advised to build a high voltage test probe, by soldering a chain of large resistors and covering them with an insulating tube (I used an old biro shell) to prevent arc-overs. This would allow me to safely measure the EHT circuit points to see if anyone could suggest a fault.
Several people did mention they thought it an "unusual" circuit while helping me trouble-shoot. 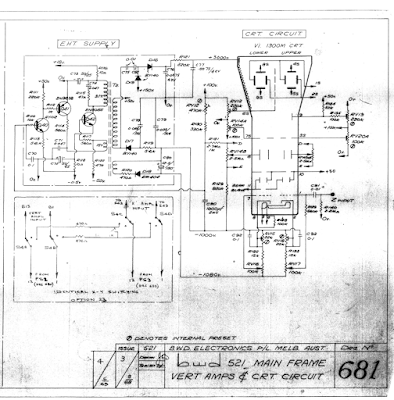 I plodded along testing, replacing, testing, replacing... It was difficult for me to understand exactly what voltages to expect on the transistors 40 - 42, perhaps because they make up the high frequency oscillator, so I probably replaced a few passives in and around here that did not need replacing.
And then I had a breakthrough - under the mounting for the twin coils I discovered a broken connection. Fixing that brought back 2500 volts to the CRT and the traces returned. The spec said it should read 3000 volts, but it seemed to work much as before, perhaps one trace was a little less bright now.


Emboldened, I took a look at the other side of the machine, where the various low voltage supplies were derived, and the plug-in frame, at the rear in a delightfully inaccessible area near the massive transformer.
I was hoping to fix a few quirks in the operation, notably in the timebase selection.
A few voltages were off-spec, and a few associated electrolytic caps were showing high ESR readings. Given the age of the machine I bit the bullet and replaced every single electrolytic cap - where I couldn't get the approximate values I combined various values in parallel or series.
There are still a few flakey functions, but generally it's a joy to use. 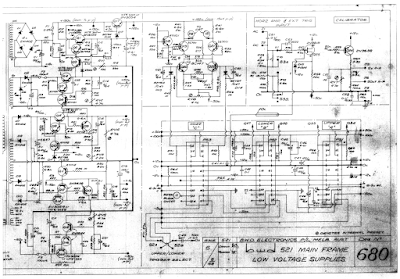 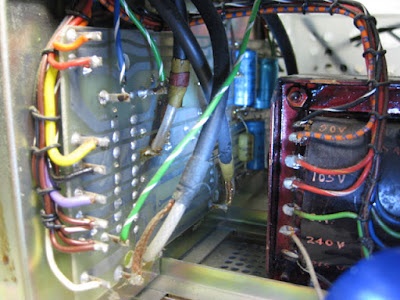 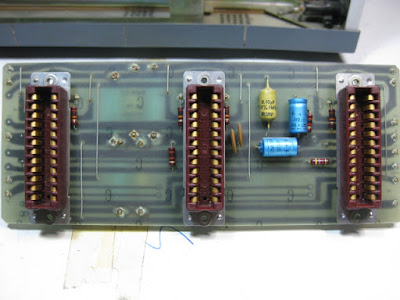 The rear board for the plug-ins 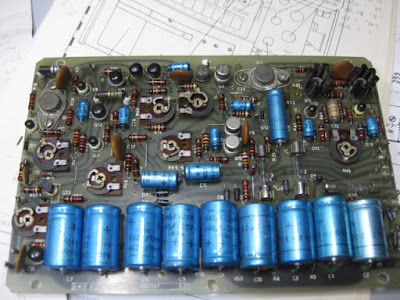 The low voltage board... 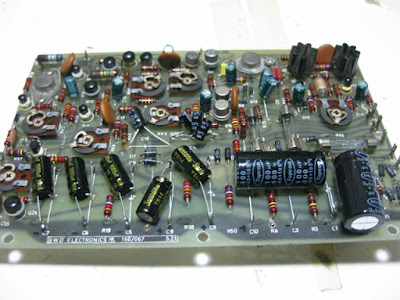 ... now with a hodge-podge of electro caps 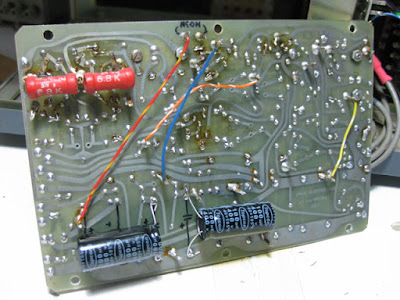 ... some even making it to the flip side of the board. Lucky there was plenty of room!

(from www.adambaby.com March 2010) The "Roland Rhythm" TR-77 was Roland's very first product, from 1972. It makes its distinctive drum voices from what are called "tuned resonant" circuits, which consist of a capacitor, an inductor and a resistor - very basic!. The patterns are preset rock, jazz and latin styles of 1 or 2 bars. There are no user-programmable patterns, because there is no "memory" - the patterns are hard-wired. That is, they are literally made from a matrix of wires between the transistor flip-flop counters, connected by diodes, to the inputs of the voice circuits, depending on which buttons on the front panel are pushed in (Pushing one in causes the others to disengage, but if you're careful you can manage to get more than one to stay in, giving you a mix of patterns.) Here's a demo video: first I start the metronome, then touch the start plate to kick the rhythm off, then hit the fade button for auto fade out... back t 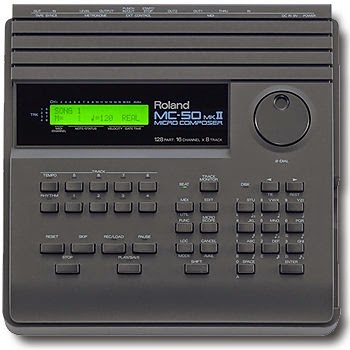 I cut my teeth on this hardware sequencer 22 years ago. There was a long break from it in the noughties when I switched to sequencing on a Mac, using Cubase, then Ableton Live. But my development of a technique to synthesize FSK sync signals in Ableton Live and send this as audio to the MC-50's sync-in jacks, has enabled me to slave this hardware to my software with rock-solid timing, giving me the best of both.   (For details see this article on my website).   Why use this old technology today? I've found many reasons, but I suppose they can be generalised as either "speed" or "fun", often both. Keystroke commands can be so much quicker than using a mouse. They are generated at a lower level of brain architecture, and so have a less disruptive effect on conscious attention, allowing it to focus on the creative effect of the task. Using a mouse engages more parts of the brain, and at a higher level of architecture (e.g. optic cortex needs to track the p 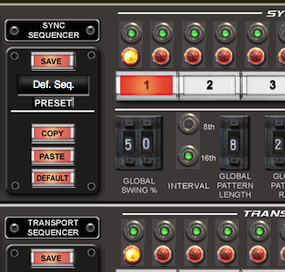 (See table at the end of this post) "Everybody play nice together." Talking about rhythmic swing with musicians is just asking for trouble. Have a poke around the interwebs to see what I mean - lots of strongly-held views, with poorly-defined terminology. But when it comes to rhythmic swing as a feature of rhythm machines, we know where that all started. It was introduced by Roger Linn back in 1979. So let's hear what he says about it, when asked what makes his drum machines so highly regarded: “Swing – applied to quantized 16th-note beats – is a big part of it. My implementation of swing has always been very simple: I merely delay the second 16th note within each 8th note. In other words, I delay all the even-numbered 16th notes within the beat (2, 4, 6, 8, etc.) In my products I describe the swing amount in terms of the ratio of time duration between the first and second 16th notes within each 8th note. For example, 50% is no swing, meaning that both 16th notes